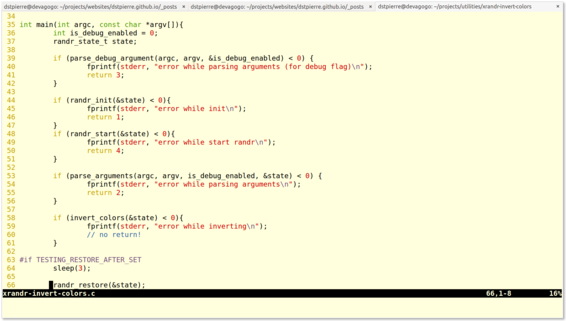 My main source of revenue is by getting paid to architect and develop C# software for companies running in Windows infrastructure. Still, since I installed Windows 8 when it launched, I’ve been slowed down by my OS. I’m not writing this to start any kind of OS war whatsoever. Its just that I decided to try something else.

Now, I’ve not totally abandoned Windows. It is required in my consulting job. But if you are like me and appreciate learning new programming languages and trying all kind of technologies, you might want to try this as well. As I’ve tweeted a couple of days ago:

How many billable hours #Windows8 makes you lost before you decided to switch to another OS? I’m yet again in a nothing’s working situation.

It is not something that you do without preparation though. Here is how I did it.

I tried to switch before

Those thoughts started in 2008 when I decided to try Mac. I bought an iMac and ran on Mac OS X for about 1.5 year. I guess Vista annoyed me at that time. But Mac was not for me, too visual.

In 1998 I ran only on a console based Debian Linux, at the time I was almost just using BitchX (irc client) and text-based web browsers. I tried many times to return to Linux since then. But two days ago, June 9th 2014, I was ready to do whatever I had to do to have a Linux OS that should allow me to continue supporting my clients and get my work done. But more importantly to get an OS that shall let me be in control again, productive and stable.

What went wrong with Windows 8 for me

What was keeping me from ditching Windows

How to continue using Visual Studio in Linux

I have no problem running Visual Studio in a virtual machine using VirtualBox. I picked a Windows 7 OS to run Visual Studio 2013. I’m planning on installing nothing more in that virtual machine. I will try to keep everything else on Linux. I’m willing to take my time and find alternative ways to do things that I’m used to do in Windows.

This is the hard part. When you do something that you know it should take you X minutes in Windows. Now you have to dig a bit and maybe learn new ways of accomplishing the task. But I enjoy learning new things, I don’t think that would be much of a pain for me.

What distribution I choose

Here’s how it went:

8:00 pm: The family routine is over, kids are OK, time to attack the installation of ArchLinux. I was running Arch in a VM on Windows and I liked the lightweight aspect and being in control.

10:XX pm: My 1-month-old PC gives me hard time installing Arch, I downloaded Manjaro and tried to see if their installer was doing a better job than me.

10:50 pm: Looks like I will not be able to work tomorrow. Linux is still not installed. Manjaro also failed installing. WTF is that new PC.

11:3X pm: My network card is not supported. Haaaaa, that UEFI bios, WTH is that. Alright, just for curiosity, would Ubuntu work.

11:5X pm: Yeah :(. Well… It was certainly not my first choice. But Ubuntu installed without any glitch. I need to install VirtualBox, Skype, Windows 7, Visual Studio transfer my backup source code to be ready for work in about 7 hours.

12:XX am: Alright, I’m too old for this, I will take the A.M. tomorrow and finish this up.

6:3X am: Alright, everything seems to be in place, I don’t really like how VirtualBox display my Windows 7 VM, but for now it works.

7:XX am: Then, I decided to try if I could installed Xfce instead of Unity. You know that kind of thoughts couple of minutes before starting to work.

9:XX am: Fine, I will quickly install Windows 7, that should do the trick, I will not use Windows 8 and I will be up and ready to work without loosing too much of billable hours.

9:XX am: What, my network card is not detected by Windows 7. I don’t have time to search for all those drivers…

OK, I took a long deep breath and I said:

You wanted to go with Arch, you should try it until it work.

10:XX am: Let’s give Arch another chance.

11:XX am: Nope, I failed. Well, OK let’s return to Ubuntu and try not to do stupid thing this time.

Yep, that’s me. Went to Linux, than Windows 7 than back to Linux in 12 hours. But I did not wanted to dual-boot. If you dual-boot it’s too easy to be tempted to always return to the easy path and it take a longer time to learn.

The moral of the story is, if you are thinking about switching to Linux, make sure you have the following.

When you are in an hurry, it’s often not the best time to install a Linux distribution that does not work out of the box with your current hardware.

I’ve already my feet wet. I was unable to get a tool xcalib to invert colour of both of my screen. Only one of them was inverted. I took some code here and there and compiled a small C utility that invert my screens. For a programmer Linux feels right at home. As anything it take times to really be comfortable with a new environment. My first task on my list is to learn Kdenlive and continue my screen casts the way I was using Camtasia Studio.

If you are a .NET dev, you should at least consider creating a Linux virtual machine on your Windows box. Developing Python, NodeJS, Go is much appealing on that OS to say the least.