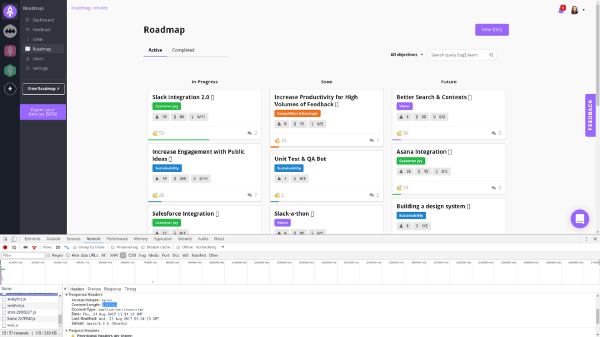 The last two startups I’ve built used TypeScript and React for the front-end.

I know, I know, this is before gzip compression. Still a heck of a first payload before it’s in the browser’s cache.

And this is only the app’s own bundle, there’s lots of other resources to load on top of that like Intercom, Google Analytics, the CSS, all the images, etc. I’d like my SPA to be way smaller than that, since React account for at least 90% of the size of the bundle.js, there’s not much I could do.

A couple of months ago I’ve started to hear good things about Preact and their tag line (or their home page HTML title) at the time of writing this is:

I’m usually not a fan of taking others’ products and building a case based on one aspect the other thing do better, but I admit that React is HUGE and 3kb for advertised ~same functionalities was intriguing.

It’s pretty quick to test Preact with TypeScript, as in the 5 minutes quick, we’ll do just that.

First step is to create a new project with npm init and install the required packages:

We will now create our tsconfig.json configuration file to have the TypeScript compiler do the transpilation:

One important option here is the “jsxFactory”: “h”. Preact use its own class to render the JSX code to JavaScript, and it’s called “h”. We will see later how it’s done.

This will load our bootstrap file called bootstrap.tsx inside our src director. Now lets create the structure for our test project:

We will now create our app entry point bootstrap.tsx inside our src directory:

We’re basically simply loading our main app (which does not exists yet) and we tell Preact to start loading it into our app container with the id of app.

We’re using render instead of ReactDOM to accomplish this.

In all your Preact components you need to import h from preact so it can render JSX to JavaScript via the jsxFactory discussed above inside the tsconfig.json file.

Lets create a quick app to test that what we have so far even work. This is app.tsx inside the src directory:

Alright, pretty similar to a React component right? We’re basically simply declaring the props and state interfaces for the component and the component implementation itself.

To test a basic example of the life cycle of component, I’m simply having a timeout that will set the state of the component after 2 seconds.

One interesting aspect to notice is that Preact does pass the props and state as parameter to the render function which I find particularly pleasant to have.

The only missing pieces to test our simple app is our index.html in the root directory:

Now we can build our simple app with:

This should build your app along with Preact lightweight library and the end result would be in the ~45 000 bytes. A major boost I must admit.

How can they achieve this size you say?

Of course Preact is not supporting 100% of what React have implemented. Here is what’s not included and my experiences in not missing them and why.

PropType validation: With TypeScript we have interfaces to give us validation and similar effect.

React.Children: I typically never use this on my two last production React apps.

I suggest you have a look here to see the difference from Preact and React.

Now as I’m sure everyone is waiting for my opinion ;)

From a back-end Go developer that needed to built 2 SaaS using React, here’s my thoughts on Preact.

I’m currently testing Bulma as a CSS UI framework to pair with Preact. The fact that Bulma does not include any JavaScript make it a good candidate.

For migration, Preact have this switching to Preact guide that could help depending on your current code base.