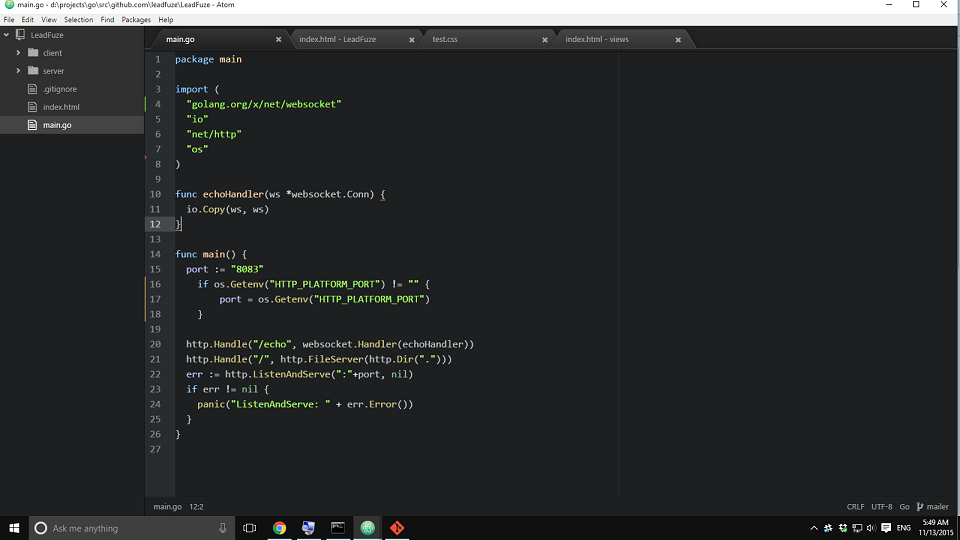 You know when you do something by habits and don’t really have time to see if there’s a better way to do it?

That’s exactly what I was doing regarding my Go deployment to my Azure Web Apps.

Here were my flow for deploying a Go program to Azure Web Apps.

The last steps was automatically picking the new exe as the new app to handle requests.

Here’s the web.config that I had.

Although this was taking me like 45-60 seconds of manual commands, it was fairly quick to have a new version in production.

Then I needed to implement websocket

I’m currently porting some Node apps and I needed to have websocket handler. On Node when you want to enable websocket you need to eneable it on the Azure portal, and you need to add this to your web.config:

Long story short, I exhausted all my idea and start fearing that Azure websocket and Go app were not going to play nicely. Than I posted a StackOverflow question.

Xiaomin Wu replied and I was shocked to see on his Github repo the presence of the Azure button “Deploy to Azure” and he also mentioned that he did not created any web.config.

What? Can we just git push to Azure for Go app now?

I than plugged my Azure Web App to my Github repository and tried to deploy. It worked.

This is a major improvement in the flow of deploying changes to production.

I compared the web.config that is automatically created by Kudu with mine and there’s not much difference. Still don’t really understand why my manual deployment did not work with websocket, but I’m just glad we can now deploy Go apps to Azure from a git push.

Been loving Go so far

This past year was super exciting for me in terms of technologies that I had the chance to discover and work with. Go is the most recent for me in production and so far I like it very much.

The learning curve is steep, especially from someone like me that’s coming from a ~15 year C# background.

But I think it is making me become a better programmer, and it has been a long time since I felt this from a language.